Enter for a chance to Win a Free Vacation!

Note: Amenities are not combinable when booked in guarantee categories W, X, Y or Z.

READY TO PLAN YOUR SHORE EXCURSIONS?

Cosmopolitan Amsterdam is most famous for its narrow, gabled houses lining the canals. Interesting attractions include the medieval weighhouse, Royal Palace on Dam Square, and New Church. Its most glamorous industry is the diamond trade. Not too far from Amsterdam are the flower centers of Aalsmeer, the picturesque fishing villages of Volendam and Marken, cheese markets at Edam and Gouda, and historic Haarlem, the main center of the bulb-growing industry. Enjoy the city’s sights from a glass-topped sightseeing boat which passes characteristic gabled houses and negotiates picturesque arched bridges. Facing Dam Square, the Royal Palace was built in 1648 and is still officially the royal residence, although the royal family resides in The Hague. The marbled Citizens Hall with inlaid maps of the world is worth seeing. One of Amsterdam’s most visited sites is historic Anne Frank House. Rijksmuseum, the city’s most prestigious museum, houses the largest collection of Dutch paintings in the world. Van Gogh Museum houses a striking collection.

Amsterdam: An Introduction to Amsterdam – 4 hours

Founded in the 8th century and one of Norway's oldest towns, Stavanger is situated along the Byfjord, an arm of the Stavangerfjord. A bishop ruled the city from the twelfth through seventeenth centuries. At the end of the eighteenth century, Stavanger had developed a successful merchant shipping fleet and during the next century developed herring fishing and canning industries. Appealing echoes of that proud heritage live on amid the evocative cobbled streets of Gamle (Old) Stavanger, whose whitewashed 18th century houses are probably northern Europe's best-preserved community of wooden houses. It has a well-preserved 12th century stone church.

The village of Eidfjord in Norway stands at the top of the fjord of the same name on sandy ground at the mouth of the Eio River. Behind the village are strange gravel and sand terraces, left some 9,000 years ago when the inland ice melted and flowed away. The charming church bears the inscription 'Ragna Asulfsdatter built this church - she died on Christmas Eve'. Folklore has it that the lady built the church in the 12th century as an atonement for killing her husband!

At the head of three valleys amid the peaceful surroundings of the Inner Nordfjord, Olden is the key to a not-to-be-missed journey up to the frozen cascade of the million years old and ever-advancing Briksdal Glacier, best-known of the gigantic, Jostedal's many icy arms. An Iron Age burial mound was discovered in this region of Western Norway, but in more recent history, most of the town was settled in the seventeenth century. In Olden, an historic church was built in 1746 and survived the Second World War.

The region is famous for its beautiful scenery with high mountains and blue fjords, of which the Geiranger fjord is one of the most attractive tourist places in Norway. The climate is less severe than might be expected from its geographical location, with mild winters and cool summers. Ålesund, with its unique architecture, is the center of business and industry in Møre and Romsdal. As the sea, the woods and the mountains are easy accessible, the possibilities for outdoor and sports activities are excellent, both in the summer and winter season.

Svolvaer is the main town of the Lofoten Islands in northern Norway. It is on the southern coast of Ostvagoya, the easternmost island of the group. The rugged and bleak countryside around Svolvaer has attracted both tourists and artists, and the town has become something of an artists' colony.

Trollfjord
6/27/2022 6:30:00 PM
6/27/2022 7:00:00 PM
One of the most popular sights in the Lofotens, this extremely narrow 1.25 mile long Norwegian fjord opens to a picturesque view of the Lofoten Islands landscape.  Navigating though the Trollfjord can be very intense depending on the size of your vessel and some larger coastal steamers scrape their sides on the rock walls during passage.  Visitors can enjoy a ferry ride through the fjord to visit Trollfjord Island, where they can learn about the 19th century “Battle of Trollfjord” between small-vessel fishermen and larger commercial steamship operators.
Tromso
6/28/2022 1:00:00 PM
6/28/2022 10:00:00 PM

Enjoy the appealing frontier atmosphere at this ancient whaling capital and base for expeditions to the North Pole.

Honningsvag/North Cape, Norway Welcome to the top of the world! The village
of Honningsvag is the northernmost community in Europe, set in a land of vast
forests, dramatic fjords and crashing waterfalls, bathed in the eerie light
of the Midnight Sun. Just up the coast is the North Cape, Europe's northernmost
point, with breathtaking views towards the Barents Sea and the polar north.

Honningsvag/North Cape, Norway Welcome to the top of the world! The village
of Honningsvag is the northernmost community in Europe, set in a land of vast
forests, dramatic fjords and crashing waterfalls, bathed in the eerie light
of the Midnight Sun. Just up the coast is the North Cape, Europe's northernmost
point, with breathtaking views towards the Barents Sea and the polar north.

The Rock carvings at Alta, dating from circa 4200 BC to 500 BC, are on the UNESCO list of World Heritage Sites. In additon, the Komsa culture was named after the Komsa mountain in Alta municipality, where the first archeological remains were discovered.

In World War II, the German battleship Tirpitz used Altafjord as a harbor, and was damaged here by attacking allied warplanes.

Altasaken in 1979 made headlines for weeks, as many people (especially environmentalists) demonstrated and used civil disobedience to prevent the building of a dam in order to produce hydropower. The dam was built, however, and the river still offers good salmon fishing.

The small town of Harstad, 75 miles northwest of Narvik, sits surrounded by craggy, snow-topped mountains on the island of Hinnøya. Harstad’s greatest attraction is the Trondenes Church which dates back to the 13th century. This structure was originally built as a fortress church; its design incorporates massive walls, some 7 1/2 feet thick. At the time, Trondenes was also Norway’s northernmost stone church and one of the most important in the country during Roman Catholic times. As early as the Viking Age the church was used as a local gathering place, including the meetings of the Ting (local parliament). Serving as the breadbasket for northern Norway, this region provides seasonal fruits and vegetables for nearby marketplaces. Harstad’s pretty setting with hilly streets, rainbow-colored wooden houses, terraces and views of the mountains is especially appreciated by the summer crowd which flocks here to enjoy the North Norwegian Arts Festival and International Deep-Sea Fishing Festival, usually held in June and July.

Bodo is the second largest city in Northern Norway. Its beautiful scenery and natural surroundings offer visitors excellent outdoor activities. Travellers can go hiking, and cycling though the idyllic countryside and watch sea eagles. Bodo also offers excellent fishing for those wishing to explore rivers or lakes populated with high quality trout and salmon.  In this varied coastal landscape visitors will find everything from sheer mountain faces and white, sandy beaches, to charming farming communities.

With its spectacular setting among seven hills, Bergen is one of the most beautiful and enjoyable cities in Norway. Most sites are within an easy walk from the harbor. From fine surviving medieval buildings to a series of good museums such as Fishery Museum and Old Bergen open-air museum, Bergen offers a wide variety of attractions. Its scenic beauty can best be appreciated from Mt. Floyen and is captivating. Enjoy this lovely city by taking a stroll to the old part of town, passing impressive 12th-century Bergenhus fortress. Old Hanseatic Wharf, called Bryggen, is where reconstructed gabled buildings house workshops, boutiques and restaurants. St. Mary's Church is Bergen’s oldest building and one of the finest Norman churches in Norway. Rasmus Meyers Collection is a rambling townhouse featuring one of the best collections of Norwegian art, including an upper floor devoted almost entirely to Munch. Bergen boasts numerous historic buildings dating from medieval times: Bergenhus Fortress; Rosenkrantz Tower; Haakon’s Hall.

Highlights of Bergen with optional hiking

Bergen and its outskirts tour – 5 Hours

Wonderful Copenhagen is a city of bridge-spanned canals, copper-roofed buildings and manicured parks. This famous Baltic seaport is one of Europe’s loveliest capitals and the seat of the oldest monarchy in the world. Copenhagen is a focus for commerce, culture, industry and cosmopolitan atmosphere. The locale of Hans Christian Andersen’s enchanting tale of The Little Mermaid, Copenhagen is known as Denmark’s fairy-tale city. Its impressive theaters, museums and churches are of interest to many visitors; the best-loved attractions include the world-famous Tivoli Gardens, the Langelinie Harbor with its Little Mermaid statue and the busy shopping promenade known as Strøget.

Made in Copenhagen: Danish Design from local craftsmen

Copenhagen Walking tour in the pursuit of Hygge – 4 Hours

Copenhagen Sustainable boat tour- you are the captain! - 3 Hours 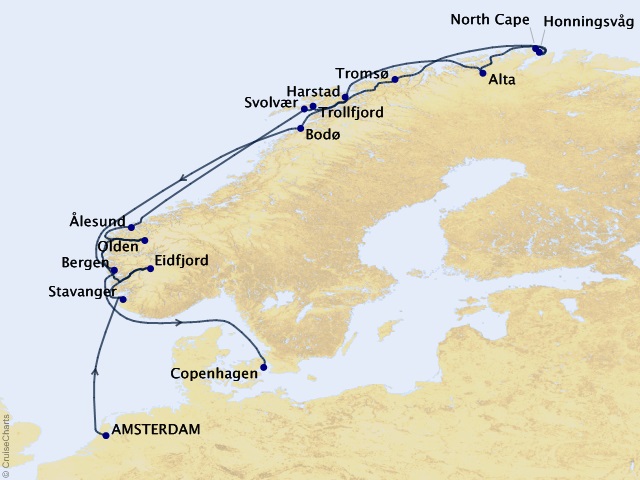 Itinerary subject to change without notice. Please confirm itinerary at time of booking.

Rates are cruise only, per person, based on double occupancy. Taxes, Fees and Port Expenses of $341.14 additional for all guests. Rates are subject to availability and may change without notice. Restrictions may apply.

Remarks:
Prices are per person, based on double occupancy. Airfare, Taxes, Fees and Port Expenses are additional for all guests. Pricing for 3rd and 4th guests are available upon request and are subject to stateroom category availability. Prices change frequently

All prices per person and in USD unless otherwise stated.
Offer ID:
1398573

Reference this number when contacting our agency so we may better serve you. Also keeping this number handy will allow you to locate this document again quickly.

Information and pricing is subject to change without notice. While we do our very best to ensure that information and pricing appearing in this website is complete and accurate, we cannot be responsible for incomplete and inaccurate representations, which may or may not be under our control. In the event of a pricing error, misrepresentation or omission, we reserve the right to adjust the pricing or make any other corrections.