Enter for a chance to Win a Free Vacation!

*Applies to the first two passengers on the booking.


Ask about adding OLife Choice, a limited time package including your choice of Shore Excursions, Shipboard Credit or Beverage Package.

*Restrictions apply. Promotions vary by sailing and not all of the above mentioned promotions apply on every sailing. OLife inclusions are not combinable with the fares in Pricing and Staterooms tab. Offers are subject to availability, capacity controlled and may be withdrawn at any time.

READY TO PLAN YOUR SHORE EXCURSIONS?

Stockholm is Sweden’s strikingly elegant and beautiful capital. Stockholm, noted for its outstanding architecture, is one of Scandinavia’s most attractive cities. In addition to its many man-made monuments, Stockholm boasts natural beauty - with one-third of the city’s total land area devoted to parks. As the country’s major city, Stockholm offers a wealth of monuments and sites, fine museums, and a rich culture. There are also hundreds of excellent restaurants, as well as a great selection of trendy boutiques and exciting nightclubs. Visitors should start their exploration of Stockholm with the Gamla Stan, the Old Town on Stadsholmen; an island in the center of the city, it has retained its medieval charm. The maze of narrow, cobbled streets, full of art studios, boutiques, antique shops, nightclubs and bars, is best explored on foot.

Often referred to as "Pearl of the Baltic," this neat city is known for impressive architecture, wide boulevards, and beautiful harbor. Grand Senate Square, dominated by exquisite Tuomio Church and onion domes of Russian Orthodox Uspenski Cathedral, is an example of neo-Classical, Empire-style impressive architecture. Visit the lively harborfront market and Temppeliaukioa Church (Rock Church), which was created in the 60's from man-made and natural materials. Finland’s musical heritage comes alive in great Finlandia Hall, designed by renowned architect Alvar Aalto. Finland’s beloved composer, Jean Sibelius, is remembered by a beautiful monument on Helsinki’s outskirts. Helsinki has good museums displaying everything from art to architectural design. Open-air Museum - the small wooded island of Seurasaari - has a collection of vernacular buildings assembled from all over Finland which provide insight into how country folk lived until recently. Suomenlinna Fortress is the largest in the world and often called Gibraltar of the North.

Founded by Peter I in 1703, this beautiful city became the designated capital of Imperial Russia from 1712 to 1914. St. Petersburg was a gateway to the West and a distinctly European metropolis with Baroque and neo-classical mansions. The second-largest city in Russia and the country’s principal seaport, St. Petersburg boasts some of the world’s finest art museums, opulent palaces and one of the world’s most talented ballet companies. Many monuments and palaces in and around St. Petersburg are being carefully restored; they represent an important facet of the country’s rich historical and cultural heritage. Some of the world’s most magnificent art treasures are housed in the famous Hermitage; several other museums boast fine collections by Russian and international artists. Strolling down Nevsky Prospect, you will realize the pride of St. Petersburg’s stoic citizens as the former glamour and opulence of its stately buildings begin to emerge once again.

Founded by Peter I in 1703, this beautiful city became the designated capital of Imperial Russia from 1712 to 1914. St. Petersburg was a gateway to the West and a distinctly European metropolis with Baroque and neo-classical mansions. The second-largest city in Russia and the country’s principal seaport, St. Petersburg boasts some of the world’s finest art museums, opulent palaces and one of the world’s most talented ballet companies. Many monuments and palaces in and around St. Petersburg are being carefully restored; they represent an important facet of the country’s rich historical and cultural heritage. Some of the world’s most magnificent art treasures are housed in the famous Hermitage; several other museums boast fine collections by Russian and international artists. Strolling down Nevsky Prospect, you will realize the pride of St. Petersburg’s stoic citizens as the former glamour and opulence of its stately buildings begin to emerge once again.

Tallinn's many occupations over the centuries have resulted in a cultural mix and unique ambiance of this maritime city. Old Town's cobbled streets and 13th-14th century buildings attract thousands of visitors annually who admire the city’s heritage of medieval buildings, the imposing City Hall, the Orthodox Cathedral, Toompea Castle and Oleviste Church. See former guild houses, including the Great Guildhall of the medieval Hanseatic League. Other attractions include impressive Town Hall Square with 15th century Gothic Town Hall, and numerous Gothic churches including Toomekirik. Toompea Castle has fine views over Tallinn. In Hirve Park, Estonians have rallied recently in protest of foreign occupation. "Tall Herman" and "Fat Margaret" are two towers among the remnants of the original defense walls. The "Fat Margaret" tower now houses a Maritime Museum on Tallinn’s history as a busy port. Other museums include: The House of Knights on Toompea Hill which displays Estonian art from the 19th and 20th centuries; the Museum of Decorative and Applied Art.

Now reasserting its proud Baltic heritage after the return of Latvia's independence, this ancient Hanseatic river-port is the largest city of the Baltic States and a showcase for the restored Old Riga with its cobbled pedestrian streets, towers and spires of medieval churches and venerable facades of gabled 17th century German merchants' homes. It is surrounded by a moat and contains several medieval buildings, including a 13th-century cathedral and guild halls from the 14th century. Riga is still historically and architecturally fascinating.

Klaipeda (formerly Memel) is a port in western Lithuania on the Baltic Sea. It has shipyards, factories, museums and an aquarium.

Enter Gdansk (English for Gdingen) from its gateway port of Gdynia and discover one of the oldest, most important, and most beautiful cities in the Baltic. Myriad architectural styles co-exist in the heart of Old Town, including Gothic, Renaissance and Baroque. Standouts are Golden House, with its gold-plated ornaments on its detailed Renaissance facade, Artus Palace, known for its breathtaking interior, Town Hall, with its slender towers and gilt statues, the Neptune Fountain, which dates to 1633, and the elaborate brick and sandstone Great Arsenal. St. Mary's Church is the largest brick church in the world, with a capacity of 25,000 and home to the touching Madonna of Gdansk statue from the 15th century. A visit to Gdansk isn't complete without experiencing Malbork, the largest feudal castle in Europe. The High Castle, the original hilltop fort, offered sweeping views of attackers on the city, while the Middle and Lower Castles and the lavish Grand Master's Palace were built to withstand the mightiest sieges.

Green Bornholm island is a favorite escape for Danes in the summer. The sea is blue, the sun is warm, the fields are bright with flowers, and the island is blessed with picturesque, round, whitewashed churches. On a bluff overlooking the sea: a ruined castle. For lunch, try local smoked herring.

Warnemünde is the gateway to Germany's capital. The fall of the Berlin Wall in November of 1989 was a conspicuous and symbolic end to the era of the "Iron Curtain". For 45 years, Berlin had existed as a city divided. Today, with the Brandenburg Gate open once more, Berlin thrives with new life, yet it is not quite totally reunited. Like twins who've been separated for many years, it will take awhile to get to know one another again. From the Brandenburg Gate, Unter den Linden leads to the heart of old Berlin with its Prussian palaces and monuments. Venerable Humboldt Universitat nurtured some of Germany's greatest thinkers, including Hegel, Einstein, the Brothers Grimm, and Karl Marx. Wander through Spandau Zitadelle, a medieval fortress surrounded by placid waters, where the 13th-century Juliusturm Tower guards long-dead stories of past glories. For a taste of Berlin's creative side, sample the cafes and clubs of Kreuzberg.

Wonderful Copenhagen is a city of bridge-spanned canals, copper-roofed buildings and manicured parks. This famous Baltic seaport is one of Europe’s loveliest capitals and the seat of the oldest monarchy in the world. Copenhagen is a focus for commerce, culture, industry and cosmopolitan atmosphere. The locale of Hans Christian Andersen’s enchanting tale of The Little Mermaid, Copenhagen is known as Denmark’s fairy-tale city. Its impressive theaters, museums and churches are of interest to many visitors; the best-loved attractions include the world-famous Tivoli Gardens, the Langelinie Harbor with its Little Mermaid statue and the busy shopping promenade known as Strøget.

Copenhagen Walking tour in the pursuit of Hygge – 4 Hours 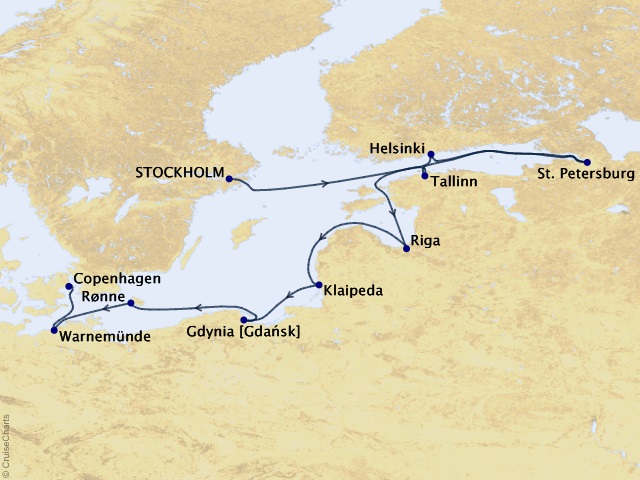 Itinerary subject to change without notice. Please confirm itinerary at time of booking.

Fares are per person, based on double occupancy and reflect all savings. Cruise-related government fees and taxes are included.

Remarks:
Cruise Only Fares are in U.S. dollars, per person and based on double occupancy. All fares and offers are subject to availability, may not be combinable with other offers, are capacity controlled and may be withdrawn at any time without prior notice.

All prices per person and in USD unless otherwise stated.
Offer ID:
1359393

Reference this number when contacting our agency so we may better serve you. Also keeping this number handy will allow you to locate this document again quickly.

Information and pricing is subject to change without notice. While we do our very best to ensure that information and pricing appearing in this website is complete and accurate, we cannot be responsible for incomplete and inaccurate representations, which may or may not be under our control. In the event of a pricing error, misrepresentation or omission, we reserve the right to adjust the pricing or make any other corrections.